What is a noun?

We have only been a class for 7 days and already these Yr 2s are showing exactly what learning at Haytor View is all about. 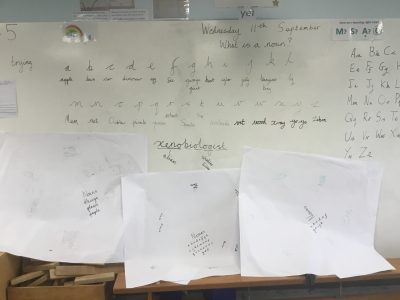 I set them the challenge of understanding what a noun is by inductively investigating a number of sentences in which the nouns had been highlighted.Once they had established a working idea, I asked them to work in teams to try and find a noun for every single letter of the alphabet. Every single one of them worked brilliantly in their team, sharing ideas, collecting ideas, checking that words suggested were really nouns, including people in discussions, organising which letter was next and who would write the word. The end result was a perfect list of words and a whole class of very proud linguists. We did have a bit of trouble with X but this gave us the chance to explore the word Xenobiologist which made Sophia very happy!