On Thursday last we had an extraordinary experience in Base 1. The children all had the most fantastic time learning new skills at the circus workshop. Lucas and Jonny were great and the children learned so much about themselves by adopting a growth mindset. The tricks they were shown, they had to recreate. It was hard at first but the children kept trying, kept going and before long they could master it. 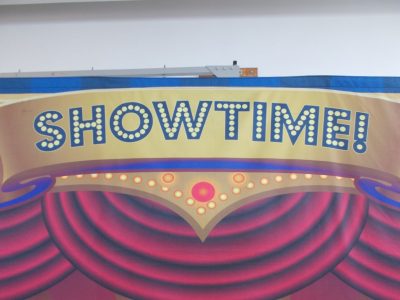 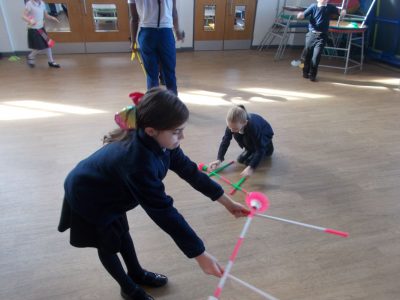 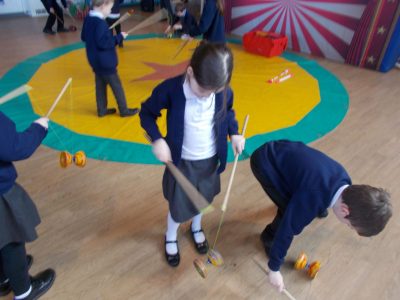 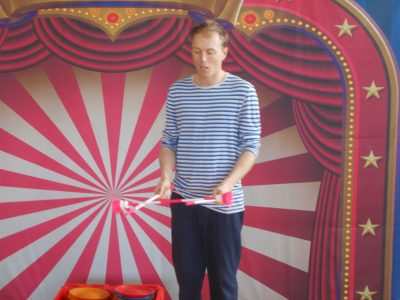 Lucas focused on the task at hand……… 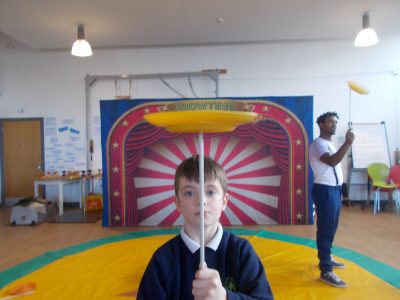 Steady does it….. Deep in concentration…. 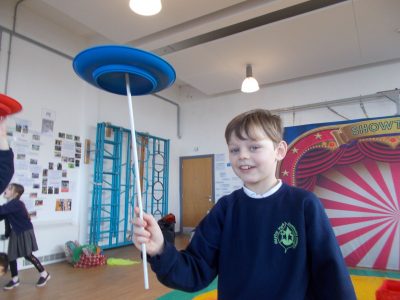 Proud as punch!!! Well done.. You kept trying and eventually you did it. 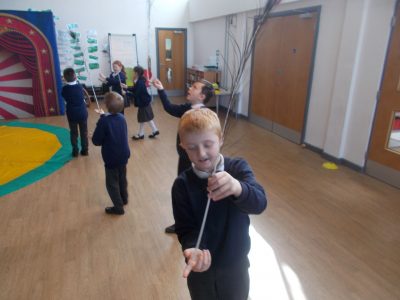 Look what I can do! Great sense of balance… 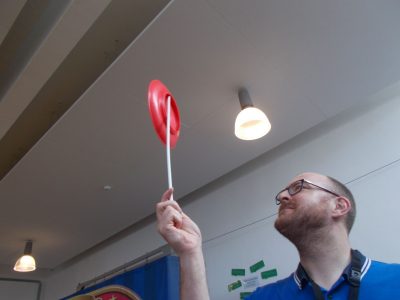 Even Mr Whitty had a go, he found the plate spinning really tough.

Some of the children’s comments were:

I enjoyed the performance, especially the juggling. – DB

The unicycle was the best bit and learning to do new tricks. – SM

The spinning plates were so cool. It was hard but I did it in the end. – TT

I loved the flower sticks they look so impressive. – AB

The diablos made me dizzy, all that spinning, but it was great fun. – IB

A massive thank you to all who took part in World Book Day 2020.

It was a great success and the children enjoyed sharing books with each other, with Year 5 and their counterparts in Year 3 and 4 Base 2. We particularly enjoyed the whole school ‘World Book Day’ assembly at the beginning of the day. At the assembly, we invited children to share their books. We saw picture books, pop-up books, information books (non fiction) and story books (fiction). We also saw new books, old books and even comic style books!

A huge thanks must go out to parents and carers for the effort you have made to make this occasion a resounding success and for the ongoing support you give to foster such a love of reading. World Book Day is such a perfect opportunity to celebrate and appreciate all the hard work you do!

This morning the children of Base 1 took a closer look inside our bodies in the Life Education bus. Inside the bus, we met Helen (Life Educator), Harold and The Brain. The Brain taught us about how messages are sent around the body and back to our brains again. It does this in a system called the nervous system. We looked a little bit deeper into our bodies and learned how our lungs work, the large and small intestine, the liver, as well as the heart, veins and arteries. After this the class discussed how to look after our bodies and of the negative effects smoking and alcohol can have on the human body.

It was clear to see that the children really enjoyed the experience. At the end of session, the whole class got the chance to meet Harold, as we made our way back to class. Afterwards, the children were heard saying things like,’ That was so cool,’ ‘I really loved it,’ the brain is so powerful – it makes us move’. 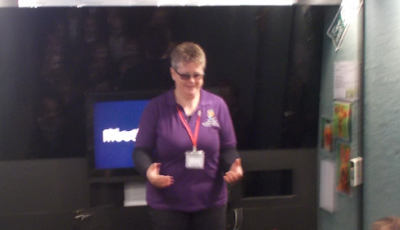 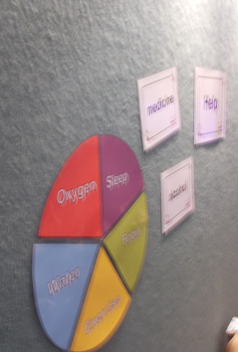 Our personal favourite comment was, ‘I use my brain for growth mindset.’ 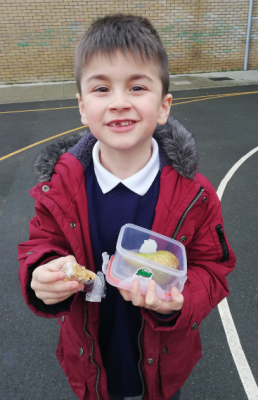 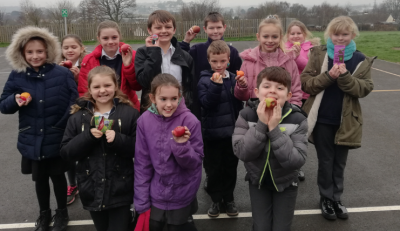 On Thursday last, Year 3 and 4 Base 1 were taken into orbit in the ‘space dome’. Children arrived excited, unsure of what far away and distant land they might see. We were taken on an adventure like no other! We were on board a space ship, sitting in the cockpit ready for blast off. 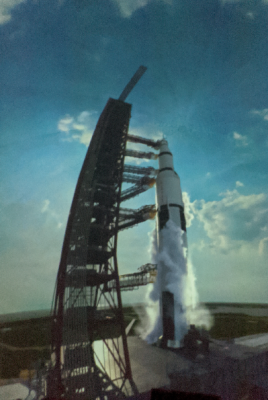 The children had the chance to view what our planet Earth would look like from outer space. The class ,moved from the sunny side to the night time side in matter of seconds. You could see great cities of the world as they were lit up by distant lights and the regions of tropical rain forest which were coloured bright green along with the dusty yellow hue of the Sahara desert. 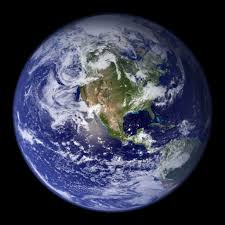 Children were amazed by the star patterns in the sky and by the planets Venus, Jupiter and Neptune. We learned about the journey brave astronauts made to the moon on the Apollo 11 space mission way back in 1969! All in all it was an amazing experience one that we are not going to forget for a while. 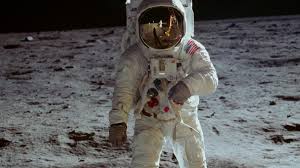 Some of the things the children said about their experiences include.

“I never knew that people went to the moon, that’s so cool!”

“When you are in a space rocket, it really is bumpy ride.”

“There are patterns in the sky. I never knew there was one that looked like a lion and it’s called Leo.”

“A woman has almost spent one whole year in space, She must miss home.”

One parent said that their child came home ‘buzzing’ after the experience and would not stop talking about it.

Today, Base 1 had a blast in every sense of the word.

On Thursday 5th December the choir sang at Tesco’s in Newton Abbot. It was a fantastic, but nervous experience singing to such a large amount of people. They all did extremely well spreading festive cheer whilst people were shopping. Members of the public commented on how amazing the choir sounded. A massive thank you also goes to parents, carers and friends who came to Tesco to support the choir in this event. May it be first of many! 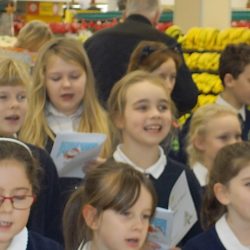 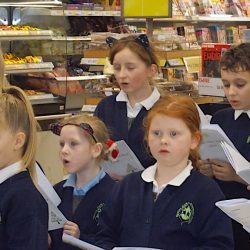 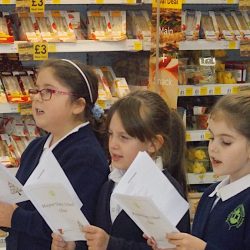 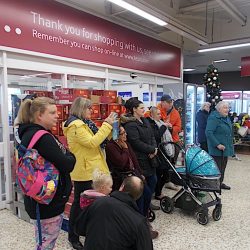 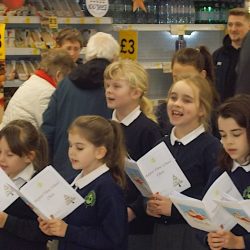 A Prehistoric Day at Torquay Museum

On Thursday 14th November, year 3 and 4 went to Torquay Museum for a Prehistoric Day. We had lots of fun learning about different prehistoric times and dressing up in cavemen outfits.

‘I enjoyed holding the bone and making the clay pots.’

‘I learnt that the big fossil is an ammonite.’

‘I enjoyed looking at everything.’

‘I learnt that people use to have big noses to breath in cold air and made it warm.’

‘I enjoyed learning about our ancestors.’ 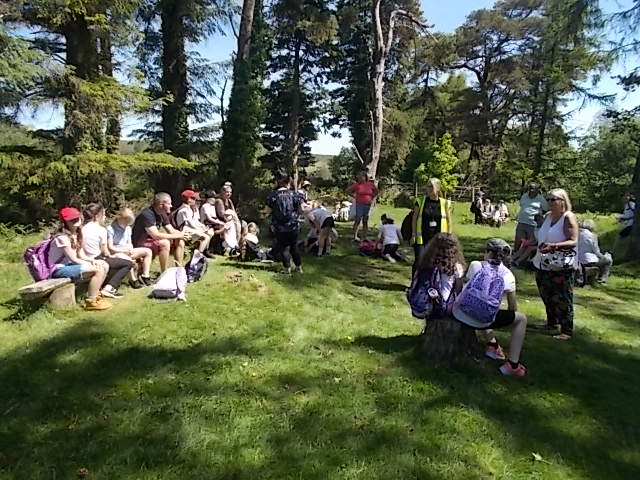 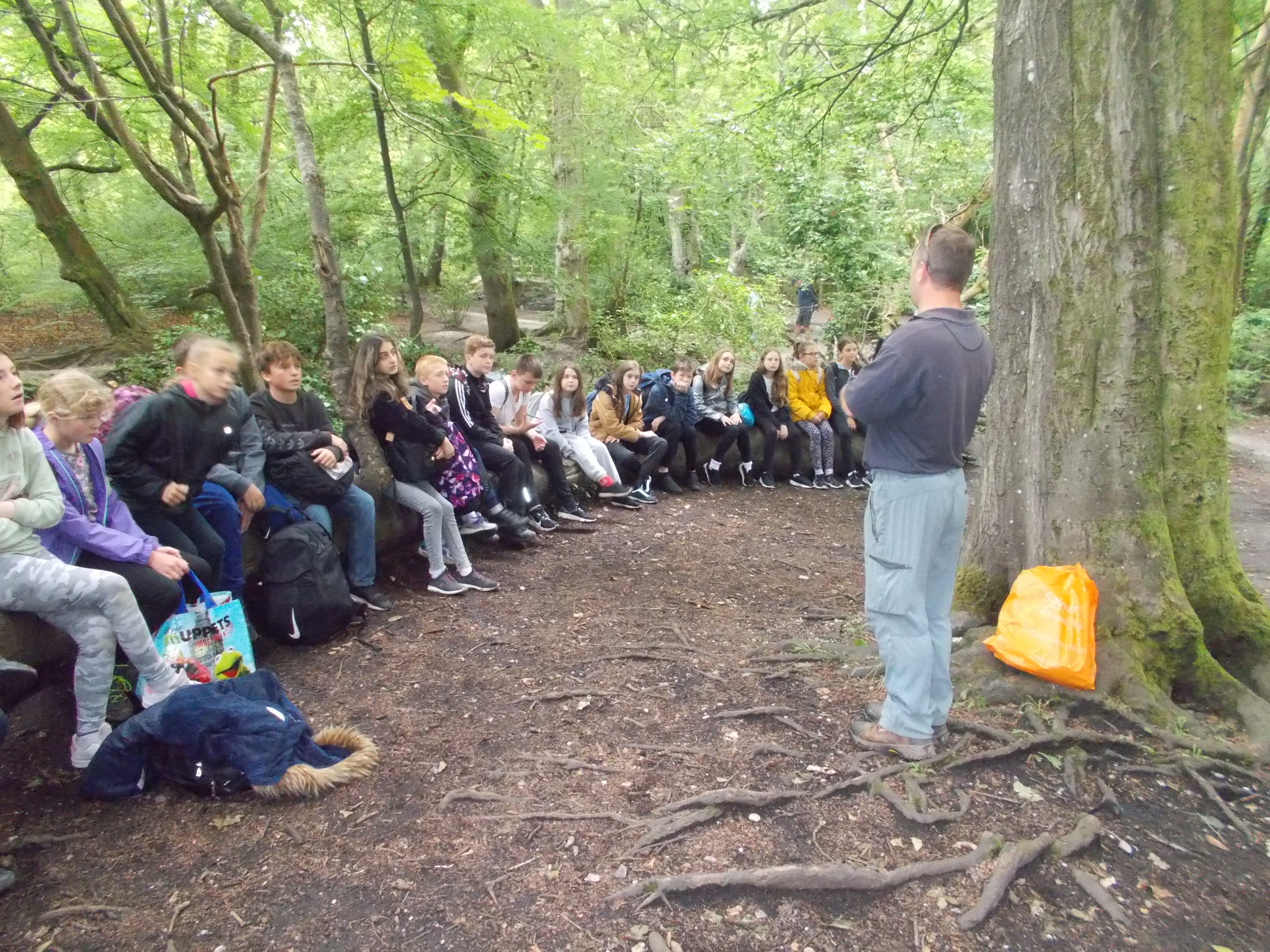 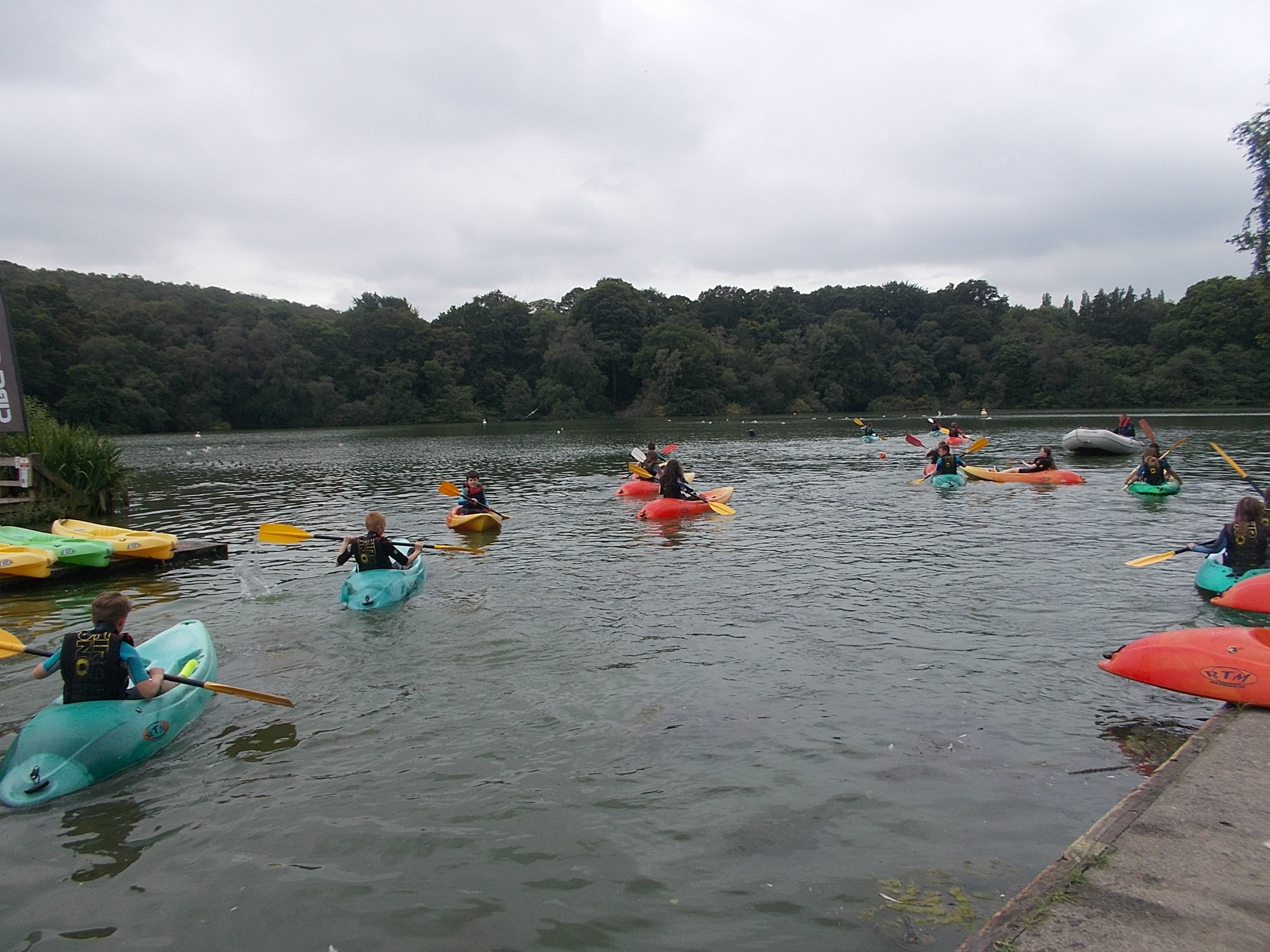 On Thursday last, Home Learning Club began in Base 1. The club runs every Thursday from 3.15 to 4.15. Home Learning offers children the opportunity to work independently and to practise skills they are acquiring during lessons. In addition to this, it aids development in areas such as decision making, organisation and personal responsibility. Our club offers your child a bit of extra support in developing these skills. It is also a fantastic opportunity for your child to receive additional support in a specific area of their learning.  For more information, please see Mr Whitty.

A reminder to those attending, please don’t forget to bring a healthy snack.

On Tuesday, 1st October, Curriculum Sports Club commenced for the first time this year. I am encouraged by the amount of interest shown by pupils and parents towards the club. The sports club focus closely follows the school’s PE curriculum and this term’s focus is Hi – 5 Netball. Netball is enjoyed by both boys and girls and offers a fantastic opportunity to develop children’s physical literacy, which will have a much wider impact than merely improving throwing, catching and shooting skills. Taking part in sports or games benefits children in so many other ways such as improving self esteem and self confidence. This free club is a chance to get active, have fun and learn new skills.

Everyone is welcome, regardless of ability.

Please see Mr Whitty for more details. I will be glad to answer any questions you may have.

Looking forward to seeing you all again next week and hopefully a few new faces.

Welcome Back and Welcome to Year 3/4 Base 1

On Tuesday, 3rd September, I was delighted and privileged to welcome children into Year 3/4 Base 1. It has been a very exciting week already getting to know each other. It is always a week full of challenges; the first week back, learning different routines, entering a new classroom, meeting new people and catching up with familiar faces – perhaps, renewing friendships that may have waned over the summer break.

The children of Base 1 have arrived back in tremendous spirits. It’s a credit to them. They look geared up and ready to go, as we all look forward together to an exciting year ahead.

I would like to take this opportunity to extend the warmest of welcomes to the Year 3 and the Year 4 parents to Base 1. I am looking forward to working with you in supporting children’s learning this year.

If you have any questions, please do not hesitate to get in touch.

Best wishes for the year ahead,